Follow these best practices to help ensure security for your Webex meetings, trainings, and events.

The Webex Meetings Suite helps enable global employees and virtual teams to meet and collaborate in real time as though they were working in the same room. Businesses, institutions, and government agencies worldwide rely on Webex. Webex helps to simplify business processes and improve results for sales, marketing, training, project management, and support teams.

For all organizations and their users, security is a fundamental concern. Online collaboration must provide multiple levels of security, from scheduling meetings to authenticating participants to sharing content.

Webex provides a secure environment that you can configure as an open place to collaborate. Understanding the security features as site administrators and end users can allow you to tailor your Webex site to your business needs.

Effective security begins with Webex site administration; which allows administrators to manage and enforce security policies for host and presenter privileges. For example, an authorized administrator can customize session configurations to disable a presenter’s ability to share applications, or to transfer files on a per-site or a per-user basis.

We absolutely recommend that you keep your number of administrators to a minimum. Fewer administrators means fewer opportunities for site setting errors.

We recommend using the following features for protection of your meetings:

Use Scheduled Meetings for comprehensive security

Scheduled Webex meetings are our recommended meeting type when security is important to you or your organization. Scheduled meetings are one-time meetings that are password protected and have a wide range of security features in meeting feature controls and attendee controls. As an administrator you can control the security features for all scheduled meetings on your Webex site. Hosts can also configure meeting security, meeting options and attendee privileges when they schedule their meeting.

Webex Meetings Personal Rooms are a form of Webex meeting that are continuously available to the meeting host. The meeting host activates their personal room when they join and deactivates the meeting room when they leave. Webex Meetings Personal Rooms are intended to provide a quick and convenient way for trusted participants to meet, and therefore have a limited set of configurable security features. If meeting security is your primary concern, we recommend using scheduled Webex meetings which have a comprehensive set of configurable security features.

All meetings: Lock meetings after a default time

Locking Webex meetings affects the meeting entry behaviour for all users. By default, all meetings are locked after 5 minutes, and everyone must wait in the lobby until the host admits them.

The meeting lock controls allow an administrator to do the following:

The default setting when a meeting is locked is Everyone waits in the lobby until the host admits them.

As an administrator, you can force meeting hosts to use the site-wide default meeting lock settings, or allow the host to set the number of minutes after the meeting starts when it gets locked. We recommend you enforce automatic locking of meetings after a set time. Meeting hosts can always use in-meeting controls to lock and unlock their meeting while it is in progress.

All meetings: Use the lobby to control meeting access for guest users

The lobby is enabled by default for all Webex meetings. With this default setting, when a meeting starts, and the meeting is unlocked, all guest users are placed into the lobby, until the host admits them.

A guest user is categorised into the following user groups:

With the default setting “They wait in the lobby until the host admits them”, when the meeting is unlocked, users in your organization who have signed in with a Webex account using a host or attendee license bypass the lobby and join the meeting directly.

The meeting host can see a list of attendees waiting in the lobby. When users are placed into the lobby of a meeting, they are categorized into three groups to simplify user screening and meeting admission choices:

Internal and external authenticated users have signed in and verified their identity. The identity of unverified users (users who have not signed in) can't be assumed to be true because they were not authenticated.

Users can be admitted to the meeting, or removed from the lobby individually or as a group. 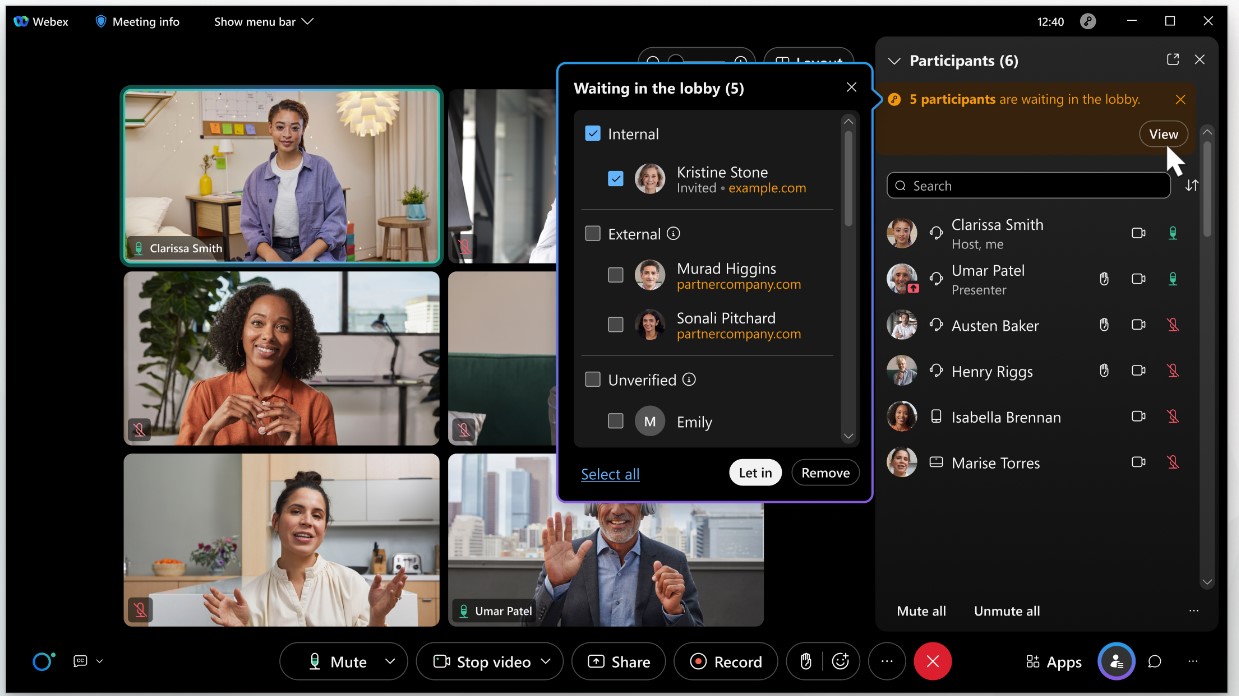 For more information on lobby controls see Know who you're letting into your Webex meeting.

We recommend that you prevent attendees from joining before the host, unless you fully understand the security risk and require this functionality.

Consider disabling the join before host options for your site, particularly for listed meetings. Otherwise, external attendees could leverage scheduled meetings for their own purposes, without the knowledge or consent of the host.

Similarly, if you allow attendees to join before host, consider not allowing them to join audio before host. If your meeting is listed on your site or is not password-protected, unauthorized users could potentially gain access and initiate expensive calls without the host's knowledge or consent.

For Personal Conference Meetings (PCN Meetings), we recommend disabling the join audio before host option. The host must dial the Webex access number for the audio bridge, and then enter the host access code and host PIN, before attendees can join the meeting.

To help reduce fraud, we recommend that you disallow certain countries in the Webex Allowed Callback Countries list. For example, you can add countries that you don’t do business with, or from which you've received fraudulent or suspicious calls.

For listed meetings, the meeting topic and other details appear on your Webex site for authenticated users, as well as unauthenticated users and guests to see. We recommend that you mark all meetings as unlisted, unless your organization has a specific business need to display meeting titles and information publicly.

You can customize session types to control content sharing and other Webex features, like file transfers. For more information, see Create custom session types for your Cisco Webex site, in Site Administration.

All meetings: Make all meetings accessible only to users in your site, by requiring sign-in when joining a meeting, event, or training session

If your organization works with sensitive information, we recommend that you require all users to have an account on your Webex site. When enabled, Webex prompts all hosts and attendees for their credentials when they join a meeting, event, or training session.

In addition, we recommend that you require attendees to sign in when dialing in from a phone. This requirement prevents anyone getting into the meeting or training session without proper credentials.

All meetings: Hide the meeting link from attendees, within meetings

Hiding meeting and event links within meetings deters attendees from inviting unwanted guests by making the links less convenient to copy and share. It doesn’t prevent attendees from copying and sharing meeting links from their email invitations.

To increase security for meetings on your site, you can prevent third-party virtual cameras from loading in Webex Meetings.

Require strong passwords for meetings (Include registration and panelist passwords)