Use this configuration guide to set up your Edge Audio solution. You will need access to Webex Site Administration or Control Hub, Cisco Unified Communications Manager, and Expressway-E configuration.

Edge Audio is an audio solution where calls originating within the enterprise go through your company network, over Webex Edge Connect, and into the cloud. Similarly, calls that initiate from Webex during a meeting route through Webex Edge Connect to leverage your on-premises audio routing. 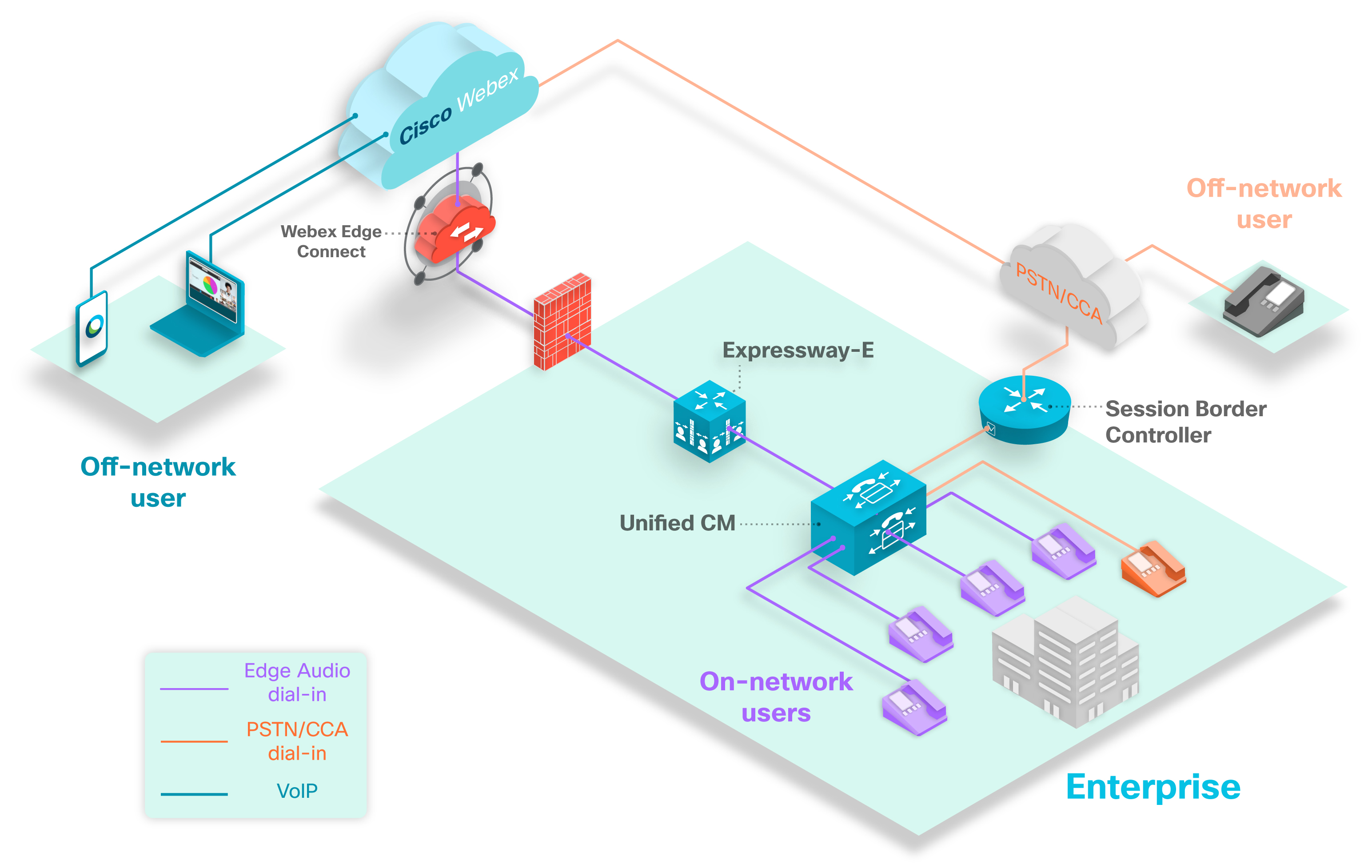 The above diagram shows a typical dial-in scenario. The purple phones represent dial-in users who are calling numbers that are set up with Edge Audio. All on-network users that dial numbers configured with Edge Audio will have their call route into the Unified CM, through Expressway-E, and into the Webex cloud.

The orange phone represents a user in your enterprise that dials into a meeting using a number that doesn't route over Edge Audio. Since the user dials an unconfigured number, the call routes through the Session Border Controller, over the PSTN or CCA-SP partner network, and into the Webex cloud.

The gray phone represents an off-network user. Off-network users who dial into Webex meetings don't route over Edge Audio. Their calls route over the PSTN or CCA-SP partner network and into the Webex cloud. 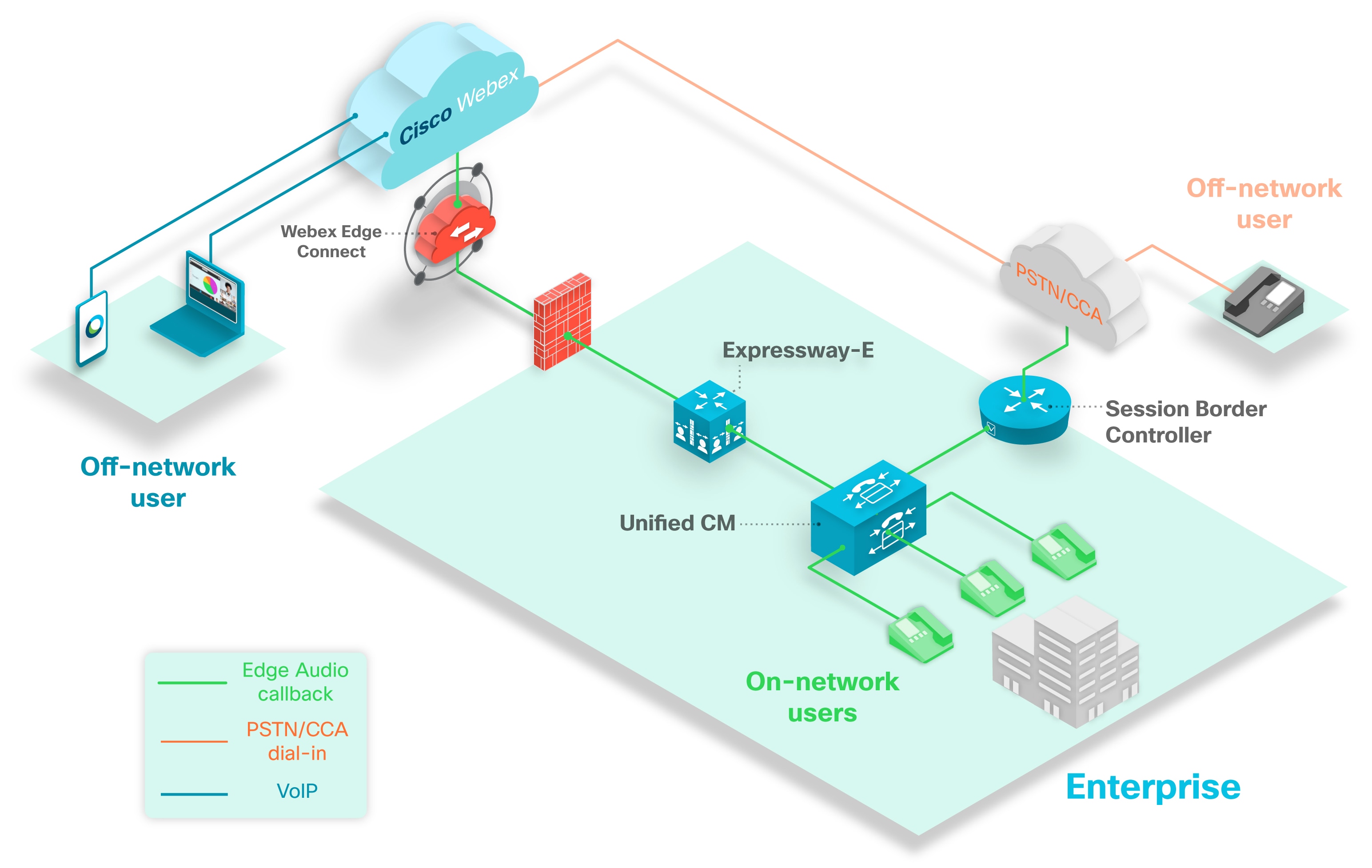 The above diagram shows a typical callback scenario. The green phones represent callback users on your network that can have calls route to them.

This guide explains how to configure the network components for Edge Audio. It covers configuring for calls going into the Webex cloud from your enterprise (dial-in) and handling callback calls that are initiated from Webex.

If you move a Webex site, always do the following:

The Lua Script with Edge Audio

Edge Audio is a global service. To route calls using Webex numbers to the Webex cloud, you must specify call routing rules in Unified CM. You can also define custom dial-in numbers to route calls for a particular country dial code and toll type to Webex over Edge Audio. Custom dial-in numbers must be accessible through the PSTN and aren't supported for Cloud Connected Audio Service Provider (CCA-SP) customers.

You also need a Lua normalization script to create the trunk in Unified CM and to maintain proper routing. You can access the Lua script and all the phone numbers (your custom numbers, and any Webex-owned numbers that you allow) from Webex Site Administration or Control Hub.

When you make a custom number accessible from a PSTN, an off-network caller can use the number through the PSTN to your Edge Audio path. The path passes from the Session Border Controller into Unified CM, through the Expressway-E, through Webex Edge Connect, and into the Webex cloud.

If your custom number is only available within your enterprise, off-network callers can't use it to call in to Webex audio on any call path.

This diagram gives a more detailed view of the task flow. These tasks are explained later in this guide. 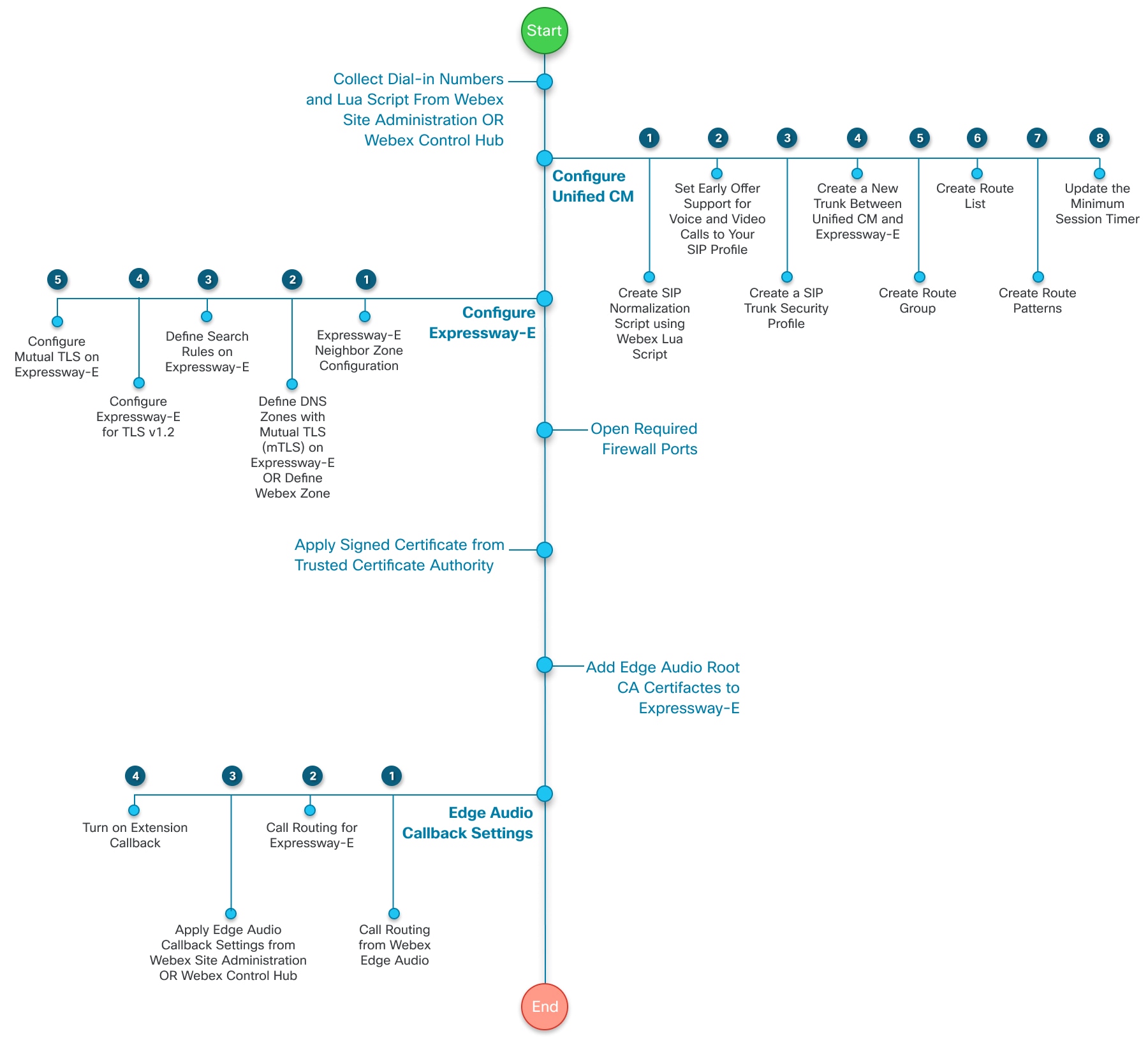 If you manage your Webex sites in Webex Site Administration, or have completed the Site Linking process, then use these steps. Configure the dial-in settings, collect the full list of dial-in numbers, and export a copy of the Lua script.

Changes take effect on the Webex side as soon as you save them. But, you must apply the updated Lua script to your Unified CM to update your call routing.

If you manage your Webex sites in Control Hub, then use these steps. Configure the dial-in settings, collect the full list of dial-in numbers, and export a copy of the Lua script.

Changes take effect on the Webex side as soon as you save them. But, you must apply the updated Lua script to your Unified CM to update your call routing.

To route calls from your enterprise to the Webex cloud, you set up routing rules and trunks in Unified CM Administration. The following are high-level steps for this configuration:

Use the Lua script that you exported from Webex Site Administration or Control Hub to create a new SIP Normalization Script in Unified CM.

Apply this SIP Normalization Script to the trunk between your Unified CM and your Expressway-E.

We recommend that you use early offer support with Edge Audio, but Edge Audio doesn't require it. Edge Audio also supports delayed offers.

If your Unified CM Administration configuration doesn't have a SIP Profile, create one with these steps.

If you have an existing SIP Profile with early offer support, you can try re-using it for this purpose. Ensure that it matches the settings in Steps 4–6 of this procedure.

Edge Audio supports the G.722 codec. You don't need to configure the G.722 codec on your Unified CM for Edge Audio to work. But, because G.722 uses less bandwidth than other codecs, configuring it might improve the quality of service for your deployment.

Create a New Trunk Between Unified CM and

You must set up the phone numbers that you saved earlier. These are the numbers that users dial to start and join their Webex meetings.

These numbers include all possible numbers that connect with Edge Audio. Depending on your configuration, country, or region, you might not want to create route patterns for all the numbers.

The Unified CM configuration now routes calls for the selected numbers to your Expressway-E.

If your deployment uses an Expressway version X8.11 or later, follow these steps:

If your deployment uses an Expressway version earlier than X8.11, follow these steps:

Define the Webex Zone on Expressway-E

If you're using Expressway version X8.11 or later, add the Webex zone to your Expressway-E

If you're using an expressway version earlier than X8.11, define the DNS zones to use Mutual TLS (mTLS).

Set Up Expressway-E for TLS v1.2

Set Up Mutual TLS on Expressway-E

Ensure that your Expressway-E uses mTLS.

We recommend updating the minimum session timer because Webex and Unified CM have different default values for this setting. This change helps avoid a certain call error for calls going from your organization to the Webex cloud.

Previously, we recommended changing the setting in Unified CM, but that approach impacts other SIP flows that don't require the longer period.

You must configure your firewalls with the proper ports and signed certificates to enable Edge Audio.

After you complete the Unified CM and Expressway configurations, you must open the necessary firewall ports. Refer to this article, https://collaborationhelp.cisco.com/article/WBX264, for network requirement information and which ports to open.

Edge Audio requires signed CA certificates from IdenTrust and QuoVadis. If you already have these CA certificates uploaded to your Expressway-E configuration, you can skip this task.

You need PEM files of the "IdenTrust Commercial Root CA1" and "QuoVadis Root CA2" certificates. You can get these CA certificates from the IdenTrust and QuoVadis websites.

Before you set up Edge Audio Callback, make sure that your deployment is properly configured:

Call Routing for the Expressway-E

For Edge Audio Callback to work, your deployment must allow E.164 numbers to traverse your Expressway and route calls based on your configuration. This ensures proper call routing for users that are on and off your network.

Edge Audio uses globally distributed media for all callbacks. To achieve optimal connectivity, Webex selects the nearest media node to your enterprise edge based on the SRV. Traffic then passes from the Webex cloud to the nearest enterprise edge for that call. This routing minimizes latency and keeps most of the traffic on the Webex backbone and off the internet.

When you enable Edge Audio callback for one or more countries, Webex routes calls over the Internet. If there are DNS, TCP, or TLS connectivity issues, or a call fails with a 380 or a 400-699 SIP error response, then Webex by default retries the call over a PSTN or CCA-SP partner network.

Extension callback for Edge Audio allows users to join Webex meetings using the Call Me feature and their internal extension. This is only available for Webex Meetings, and doesn't work with Webex Events, Webex Training, or Webex Support.

You can reuse the search patterns that you created for Edge Audio callback with extension callback.

When provisioned for your site, you can turn on the option to allow meeting participants to receive calls at an internal phone number within the same corporate site. You can also edit the label that appears within the Audio Conference dialog when participants join the audio conference.

When provisioned for your site, you can turn on the option to allow meeting participants to receive calls at an internal phone number within the same corporate site. You can also edit the label that appears within the Audio Conference dialog when participants join the audio conference.

If you manage your Webex sites in Webex Site Administration, or have completed the Site Linking process, use these steps to specify the countries or regions to which Webex can route callbacks.

If you manage your Webex sites in Control Hub, use these steps to specify the countries or regions to which Webex can route callbacks.

We recommend that you configure the extension callback for Edge Audio only to accept calls that come from your Webex site. If participants use callback to join meetings from unexpected Webex sites, the Expressway-E rejects those calls.

To set up an audio secure profile, download or copy the Call Policy (CPL) XML file from Site Administration or Control Hub. Then, upload the file to your Expressway-E clusters.

If you have an existing CPL XML file with rules to accept or reject calls, you must merge the CPL XML file from Site Administration or Control Hub with your existing file.

If you accept calls from multiple Webex sites, merge the <taa:rule> block together with the site UUID. For example, the following code block shows what the CPL XML file looks like with these three site UUIDs:

Edge Audio works with any CCA partner. The configurations are the same. The main difference is that the deployment uses a CCA partner’s network instead of Webex PSTN audio. The CCA Call Detail Record (CDR) shows any customer calls that connect to a meeting using Edge Audio. For more information on the CCA CDR, see the design document.

After a CCA partner submits an Edge Audio order, the partner either decides to configure Edge Audio themselves or work with a customer administrator to have them configure it.

The IVR prompts for calls that route over Edge Audio using dial-in numbers from a CCA Partner default to English. To set up an Edge Audio Webex site with an IVR system in another language, provide your customer with an updated LUA script that identifies the dial-in numbers for each language.

To update the language in the LUA Script, you must set the Locale tag. For more information on the locale tag see this article: https://help.webex.com/article/4zjt9m

You can update the IVR prompt for Edge Audio Webex sites to play in a language other than English. This task explains how to change the default IVR language from English to another language for all CCA dial-in numbers.

Download the LUA script from Site Administration, Control Hub, or the CCA Portal.