On Control Hub under Devices > Software, you can see the different channels and how many devices in your organization are on which channel. On this page, you can also see the schedule for the different software releases.

Your device comes with RoomOS pre-installed, and updates are installed by default automatically. Automatic software upgrade ensures you have the latest release of RoomOS installed.

The software upgrade prompt lets the user to choose to postpone the upgrade with 6 hours. If the local user doesn’t respond to the upgrade dialog within 60 seconds, the device starts the upgrade. The upgrade takes 1-3 minutes, and the device can’t be used while upgrading.

If a new software version is available on the device and you want to upgrade immediately, go to Settings > About the device > Software updates.

Typically, all the devices that are online when a new stable software is deployed download the new software within 2 hours of rollout. In addition, there’s a possible 15 minutes of delay before devices poll for new upgrades. The upgrade is initially low urgency. After 24 hours the upgrade service changes the urgency to medium.

For example, it’s possible to have the Verification channel on automatic software upgrades and to have the Stable channel on manually selected upgrade.

When advanced software upgrade is enabled, you can select from the three most recent monthly released of RoomOS for the Stable and the Verification channels. Note that this will be a rolling window and a software release automatically expires after three months. For example, if the most recent release is RoomOS October, then you can select from the August, September, and October releases. So when RoomOS November is released, the August release expires.

What happens if you don’t upgrade a selected software release?

On the Software page on Control Hub, you can see the expiry date for the software release you have chosen for each channel. Typically, a release expires three months after it’s released. You can create an alert to notify when the software version you've selected is about to expire (see the Set an alert for software expiry section below). 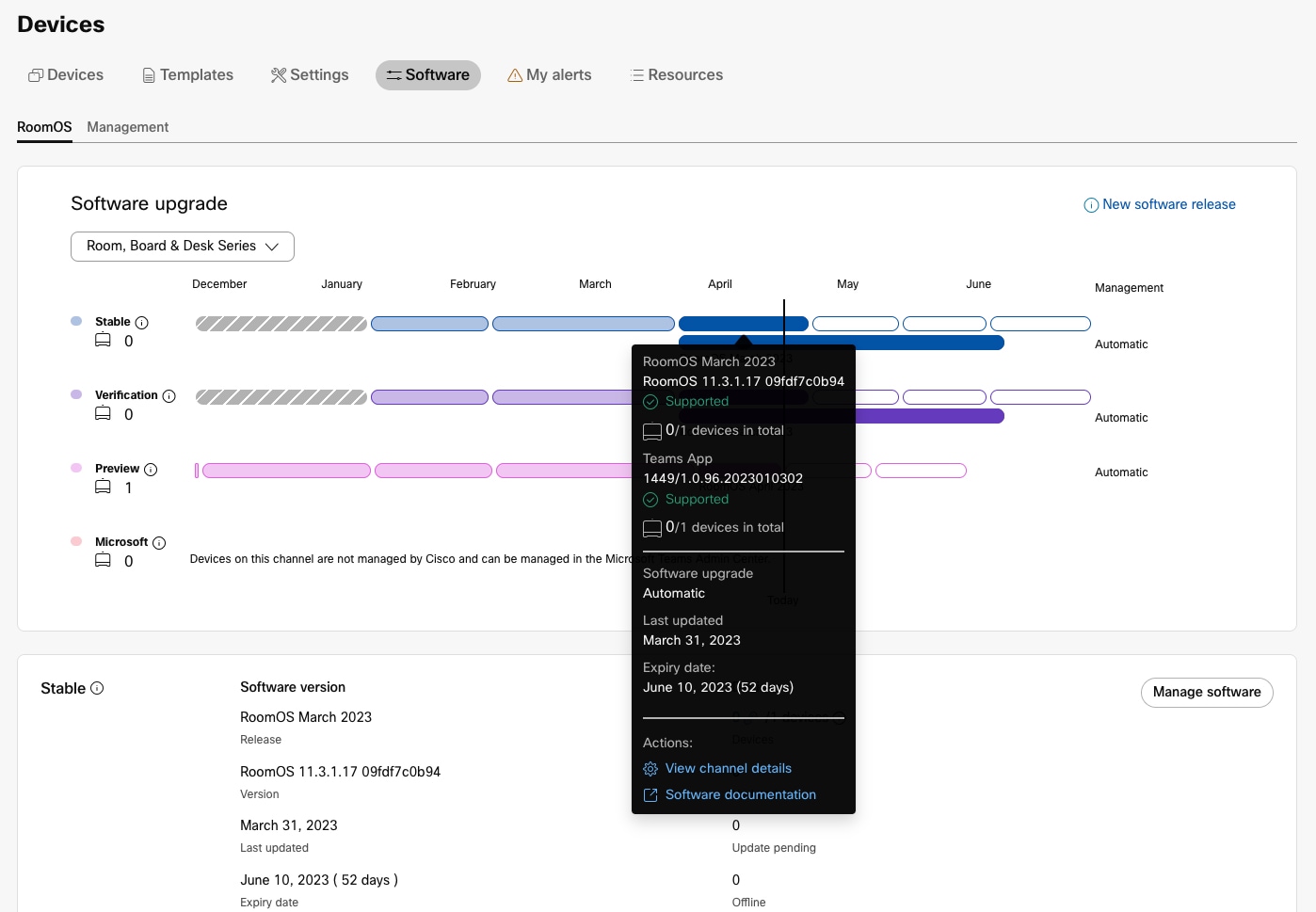 If no action is taken before the release expires, the channel reverts to automatic software upgrades. This means that the devices on that channel get the latest stable software release.

Manually select a software release for a channel

Set an alert for software expiry

To read more about alerts, see the Alert center in Control Hub article.